The Story of Bonad Painting

In rural southern Sweden, in the late 1700s a tradition started of creating painted wall hangings to decorate the dark interiors of the small farmhouses during the winter nights in the advent period before Christmas. These narrative paintings initially depicted Bible stories. They were called ‘bonad’, meaning ‘decorative wall hanging’ (plural is bonader). The word ‘bona’ means ‘to make comfortable, to make warm’. Bonader provided decoration and insulation, like a tapestry hanging.

Early Swedish bonader were created on linen, grown and woven locally, the painting surface was prepared from natural ingredients, probably a gesso-like substance; potato starch, egg and chalk, and the paint was egg tempera; natural pigments, ground and mixed with egg yolk and water. They are often several meters long. Later (1800 to 1875) bonader were produced on paper.

After the festival the bonader were taken down, rolled up and stored in wooden chests until the next time. Some homes bought a new bonad every year, so their houses were transformed with the colourful artworks smothering the walls in the run up to Christmas.

They were aspirational paintings, even though rural life was a going through a depression; with rich costumes and well fed elegant people and horses. In a naive style, they record many features of life from those times; the food, jobs, transport, house interiors. 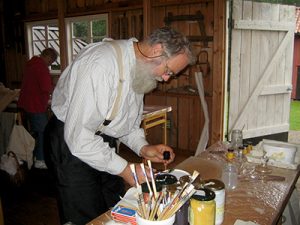 Unfortunately this art style had just about died out in Sweden, due to industrialisation and changes in fashion. Bonader fell out of favour, when other folk arts and crafts were collected and valued. The meaning of the word Bonad morphed from these beautiful fine folk art pieces to printed tapestry cushion kits.

The community in the village of Unnaryd, Halland, Sweden were very proud of the beautiful collection of local, historic bonader by Per Nilsson (1741-1820), Nils Persson (1772- 1836) Anders Andersson (1782-1865), Anders Eriksson and others. Of particular note was Johannes Nilsson (1757-1827). Johannes Nilsson suffered from epilepsy but was one of the most skilled and well regarded bonad painters in Southern Sweden.

The community raised money to create a custom built Bonadsmuseet (Museum for Bonader) in their Heritage Park. Here is now stored and displayed, a comprehensive display of local bonader including many of Johannes Nilsson’s masterpieces. See the museum website here 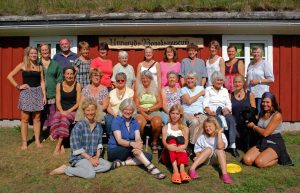 I visited Unnaryd in 2004 as part of a Peak District National Park eco-tourism project called BESST (Business and Environment linked by Small Scale Tourism). Having only produced commissions for customers for many years, my head was full of the stories and paintings that I wanted to

produce for me. However, because I have always painted and drawn in the style requested by clients, I had never developed my own style. In 2004 I was searching for inspiration to help me find my voice.

I was very inspired by the Bayeux Tapestry, and the pieces I did for myself were stitched and always featured words. But a single large stitched piece took three years! While in Sweden I came across a beautiful big bonad on the wall of the Unnaryd Church Hall. I was blown away! A painted tapestry, telling stories through the place, and environment of the painter- that gave me ‘permission’ to do the same!

Torsten Bengtsson showed me his working methods in 2004

By eye I matched pigments to Johannes Nilsson’s stunning works in the museum and chose to work with his limited pallet and I adopted some of his motifs. When I returned to Unnaryd a little later I brought my bonad paintings with me. Our Swedish hosts were very surprised and asked if I would teach them the technique. I agreed to share what I have discovered. I was introduced to Torsten Bengsston, the last known bonad painter in the area, he was in his 80s and was generous with his time, showing me his studio and working methods. Sadly, he died shortly afterwards.

For 11 years I taught at summer workshops in the wonderful heritage park in Unnaryd, with the Bonads Museum as the best open-door resource. I am delighted to have been so involved in the revival of this unique form of folk art in its native place. Now it’s a living and lively art form, practised by young and old in Unnaryd and its surroundings.